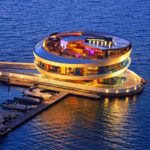 Rooftop restaurants and bars become the playground for city dwellers when the weather is warm and windy. Can there be any place better than these sky-high hideouts to bask in the radiant sunsets and sip on martinis while marvelling at the glittering skyline of the city at night? We bet not and thus today we have collated a list of ten such dreamy spots which can make you feel lost in nature’s bounty and realise that life did not actually turn out so bad. From panoramic views to gastronomic goodness we have kept it all under radar while serving you with ten such bars come eateries which will ensure that you have an experience of a life-time to share with your friends and family in days to come. 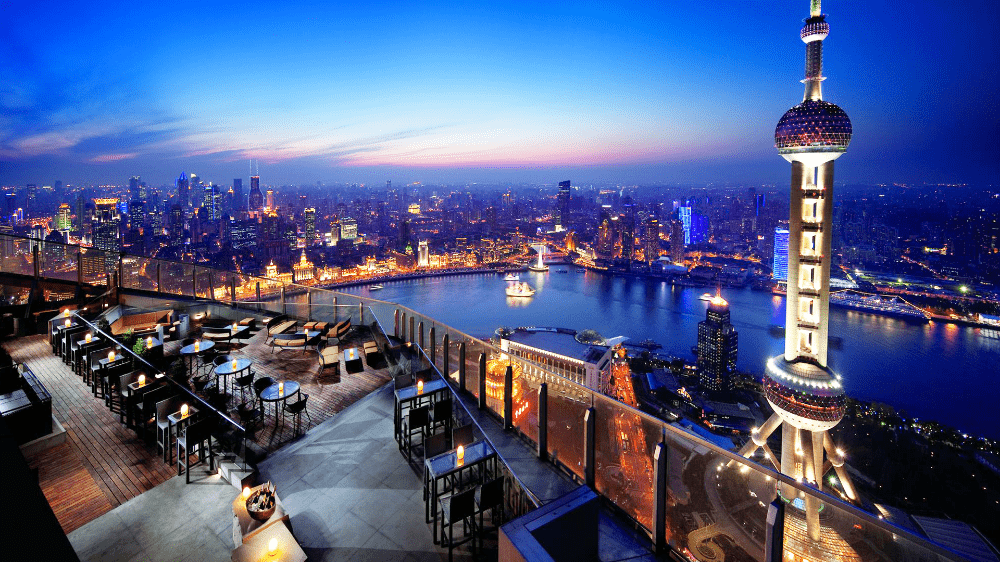 Shooting up 58 floor from the hustle and bustle of the Shanghai metropolis and overlooking the Huangpu River stands the Flair Rooftop Restaurant and Bar which is popular for its ever-changing mystery cocktail termed as off-menu Flair in the Cloud served chilled by its in-house mixologist YK Chen. If you are not much of a late drinking person, then you can try out the flavoured afternoon tea between 2 p.m. and 5 p.m. every Friday to Sunday atop the highest bar of China. The décor of this contemporarily designed restaurant has been done to perfection by Super Potato. The indoor design radiates a warm blend of modern day and rustic decors which provide a loft-like lounging ambience to the Flair Rooftop Restaurant and Bar. Finger-licking goodness from Indonesia, Japan, India, Vietnam, Thailand and China are served at Flair in tapas style while the guests can further enhance their options at the raw seafood and sushi bar. The beverage menu comprising of 40 different forms of vodka, spirit selections, signature cocktails and fashionable small-distillery rums make sure that guests can enjoy fine dining at its fullest form. 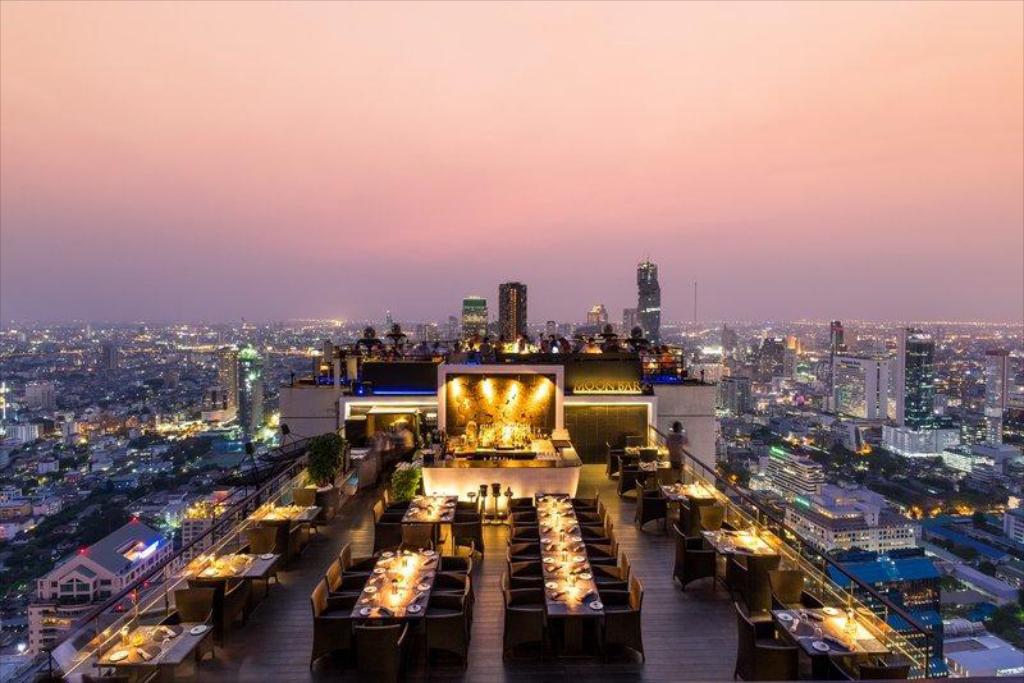 This gravity-defying combination of a bar and restaurant atop the Banyan Tree Bangkok lures in tourists with its architectural excellence which jets up 61 stories towards the land of clouds. You are bound to be taken aback once you set foot on the Moon Bar hovering over the dazzling landscape of Bangkok and offering an endless 360 degree viewing horizon. Add to it a few shots of Thai Sabai comprising of a potent mixture of lime juice, Mekhong, splash of soda water sprinkled with basil leaves and you are bound to feel on cloud nine while dining at Moon Bar which is often enlisted amongst the top 10 rooftop bars collated on an international scale. The serene view of the city lighting up post sunset is something you shall cherish long after finishing your sumptuous meal at the sky bar. 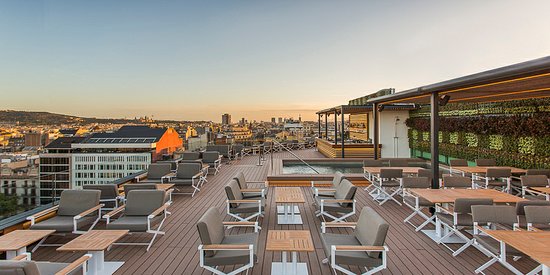 Located atop the 99-year-old Majestic Hotel & Spa the La Dolce Vitae stuns with 360 degree views of Barcelona including the likes of Montjuic and Gaudi-designed Sagrada Familia. By climbing up ten storeys from the super frenzied Passeig de Gràcia you can enjoy unbarred views of the iconic thoroughfare of the city. Michelin-starred chef Nandu Jubany cooks up a storm in the kitchen which takes the shape of Instagram worthy sangria and signature tapas sampler on your dinner plate. Once you are done catering to that hungry belly you can pose for pictures in front of the rooftop mural developed by American artist Philip Stanton. Also, popular for housing one of the best rooftop pools in Barcelona, the La Dolce Vitae can be the perfect rooftop hideout for food connoisseurs who feel that an alluring ambience is necessary for unleashing gastronomic goodness which a sumptuous meal tags along. 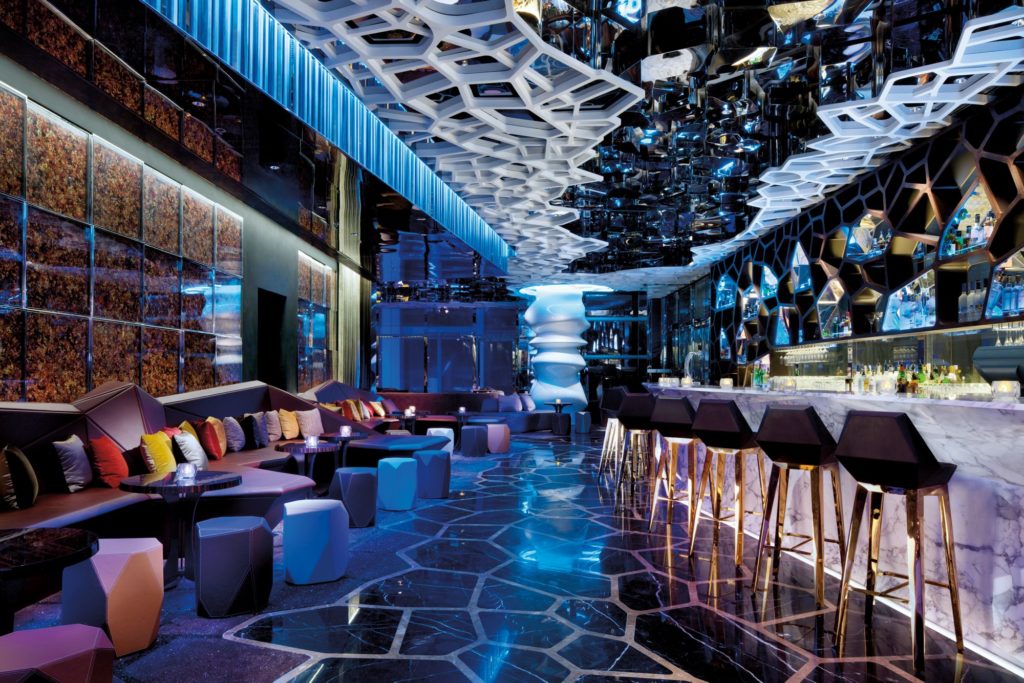 Located on the 118th floor of the Ritz-Carlton Hong Kong, the Ozone bar submerges guests in pure dreamy luxury. Set out in the mesmeric palette of blue, the Ozone stands out as one of the most celebrated sky bars which can submerge you in the gripping spell of the city’s skyline. The unique combination of inventive cocktails, striking ambience, incomparable views and delicious Asian tapas is sure to start off your evening on a high note. So, whether you wish to host your wedding party under the blissful canopy of stars in this open-terrace lounge or dance all night to the frivolous beats of the peppiest DJ’s in town, Ozone has something in its kitty for all the party revelers out there. Acclaimed designer Masamichi Katayama has added a funky flair to the bar interiors which might feel like a science-fiction set at times with its pulsating mood lighting and intricate geometric detailing. During daytime, the Ozone bar divided into a long marbled bar with stools, an open-air terrace, a mini sushi restaurant and several lounge areas receives the largest footfalls from city-workers relaxing on a lunch break and a handful of tourists coming to enjoy the city views. But once the clock strikes past 6:00 p.m. and cutting edge lightning transforms the bar into a peppy dancing floor, mostly laidback nightclub hoppers flock in. Ozone specialises in serving some unusual and innovative cocktails such as the ‘Basilic’ (gin, basil leaves, green apple, lime, yuzu foam) and ‘Bed of Roses’ (Kurrant Vodka, yuzu marmalade, rose syrup, egg white and oolong tea) which come priced at a premium slab of HK$150-200. 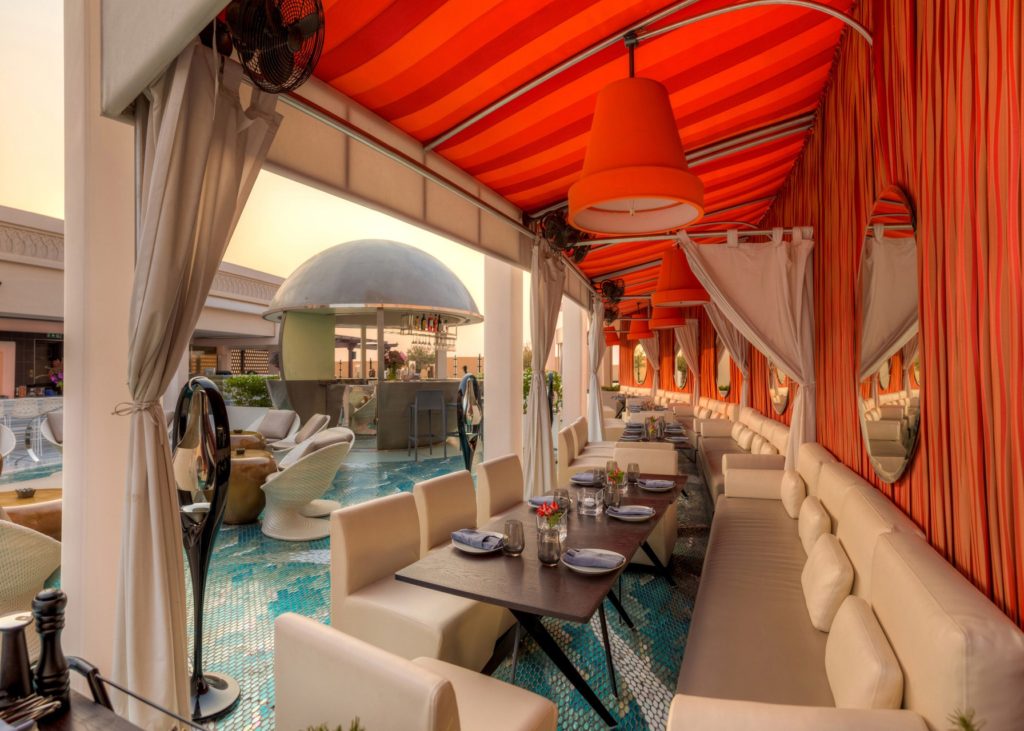 Perched atop the Jumeirah Beach resort of Four Seasons Dubai, the Mercury Lounge serves up some head-turning views of the city skyline, Arabian Gulf and the Burj Khalifa. The city’s glitterati are bound to be left spellbound with the in-house attractions in the form of a shisha lounge, champagne bar, traditional majlis seating and resident DJ to perk up those evenings with unparalleled glitz and glamour. The happy hours which kick off early never fails to sustain crowd until the wee hours with the small-plates menu comprising of oysters, caviar and truffle duck parfait. The smart causal dress code transforms into the sharpest of buttoned-down suits and highest of heels amongst the glamorous crowd of Dubai. This jewel lounge promises to glide you through the evening with style backed by a spectacular selection of light entrees, sharing plates and cocktails thus seamlessly blending in the influences from across Mediterranean Sea. 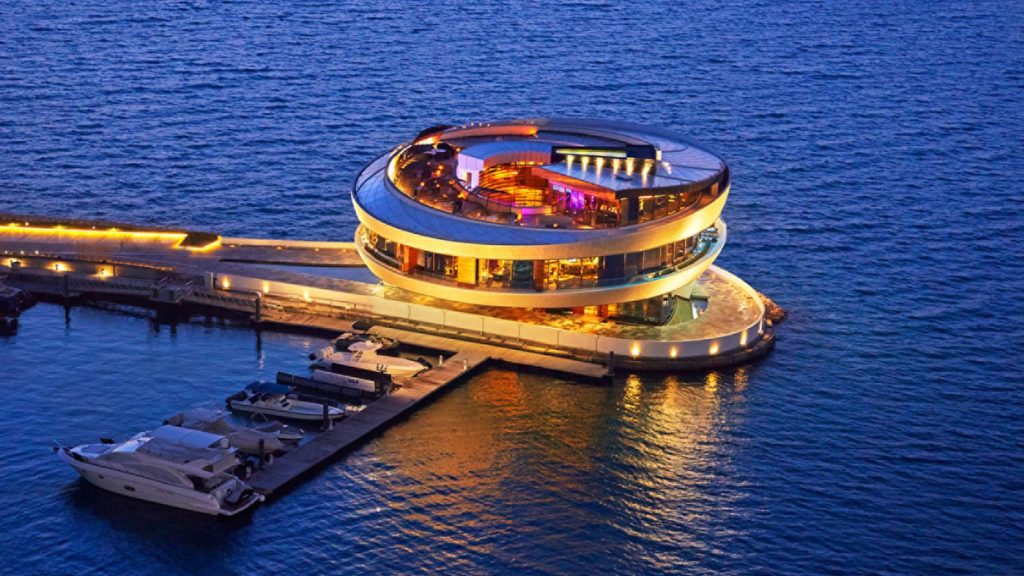 This tri-level eatery resembling an oyster shell is perched on the rooftop of Four Seasons Doha at a height of 26000 square foot. The bar provides an enthralling view of the Arabian Gulf and the yachts parked in the next door Four Seasons Marina resort. You can try out the much talked about caramelised vanilla cake for indulging in some sweet surprise after completing a full course meal at this premium restaurant built on a corkscrew design and allowing guests to shower in the mesmeric views of the coastline which glitters like emerald under the moonlight. The great wine list at Nobu Doha features some lip-smacking alcohol which is otherwise hard to great in the ‘dry’ country of Qatar. Guests can also try out some non-alcoholic drinks and mocktails such as Ryu Punch (comprising of lemon squeeze, dragon fruit, soda and elderflower) radiating an incredibly delicate fruit flavour. The circular shaped tables allow both even and odd numbers of people to sit together while basking in the terrific beauty of the moonlit sky.

This elegant aviation-themed eatery and bar set on the 6th floor of Peninsula Paris can be the ultimate spot for a couple to raise a toast to the beauty and romance of the City of Light while marvelling at the lovely Eiffel Tower. Both the hotel interiors which display a 75% size replica of the L’Oiseau Blanc biplane and the menu consisting of cocktails pay reverence to the ex-First World War flying aces François Coli and Charles Nungesser who won over transatlantic aerial transport in 1927 by traversing between Paris and New York in their plane named L’Oiseau Blanc. Some other aviation memorabilia include chinaware for the L’Oiseau Blanc created by Bernardaud featuring a bespoke plane design courtesy its long-standing association with the Peninsula. The food spread offering traditional French cuisine is revamped on a daily basis by Chef Sidney Redel who handpicks the seasonal ingredients himself from the markets. 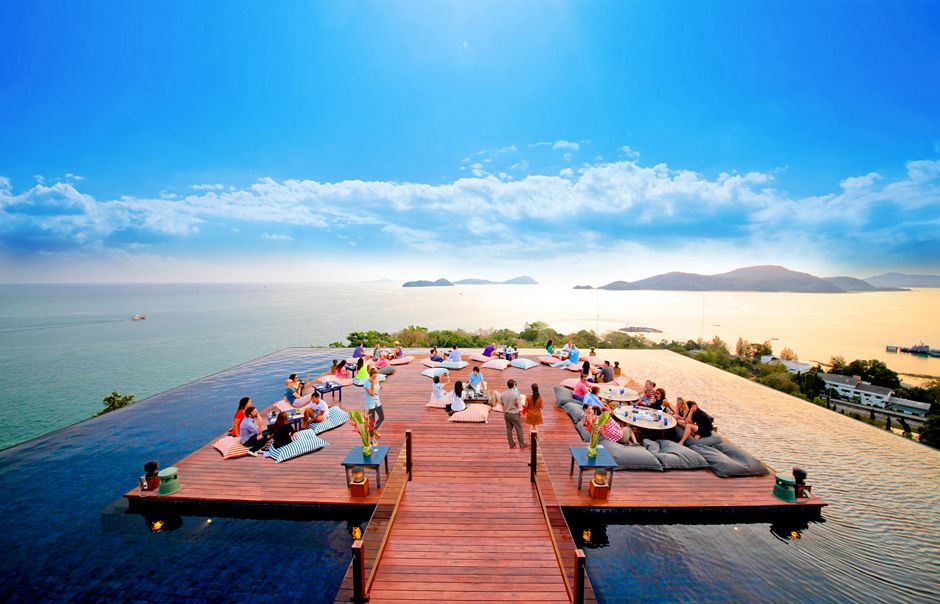 This floating bar strewn with over-sized comfy pillows can be the perfect nesting place for those who wish to stretch their limbs while sipping on Sri-jitos (the fabulous take of Sri Panwa on mojito which comes infused with lemongrass, mint, fresh lime and Grey Goose vodka). Overlooking a 360° view of the surrounding islands over the sparkling Andaman Sea, Baba Nest is bound to mesmerise guests with its exclusive line-up of fine wines, high-end cocktails and flowing champagne to kick start your evening in style. You can head to this rooftop bar of the family-run Sri Panwa Phuket to soak in the sexy charm of alluring sunsets or maybe simply lie down with a plump cushion and enjoy the stunning nature’s bounty of blue and beyond. The infinity pool surrounding the rooftop terrace conjures an illusion of the roof merging with the surrounding sky and simply dropping away in blue madness.

The bar operates between 17:00 p.m. to 21:00 p.m. wherein guests can sit back and watch the sky changing shades from bright blue to flaming red, scorched orange and dusty pink paired with descending nightfall when the glow of the sun slowly disappears over the water. You are advised to get your table booked in advance as the seating capacity comes with an upper ceiling in the kingdom of clouds. Residents have to abide by the minimum spending limit of 500 THB whereas outsiders have to splurge at least 1000 THB per person which surely won’t b e a tough job given the lavish 13-page drinks menu with the prices of some even hovering around the 3000 THB range. 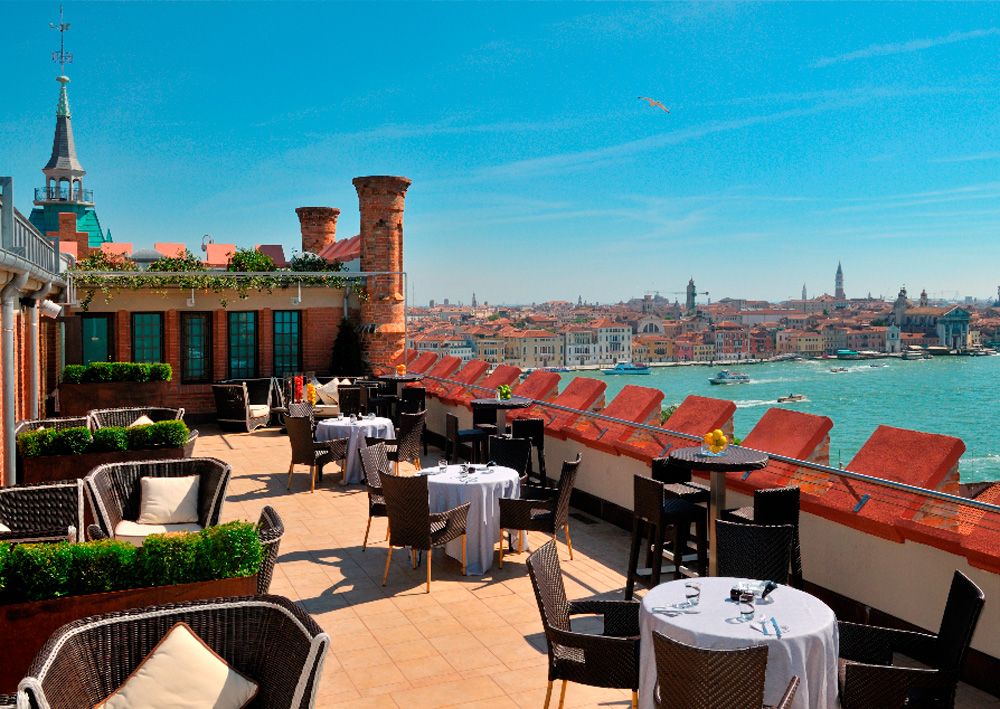 This beautiful bar perched atop a reinstated mill offers breath-taking views ranging from the Giudecca Canal to the Piazza San Marco. The romantic ambiance of the bar never fails to lure in wealthy Venetians who wish to dine with panache. Consisting of two rooftop terraces each having a seating facility of 100 people opens its gates to the general public round the year between 5:00 p.m. to 1:00 a.m. Guests are bound to be spoilt for choice while scanning through the lavish menu options ranging from expertly created cocktails to delectable appetizers with the mesmerizing view of the Venice skyline in the background. This first come first serve hotel located on the topmost floor of the Hilton Molino can be the ideal place to soothe out your tired nerves and rejuvenate your senses after a tiring day at work. 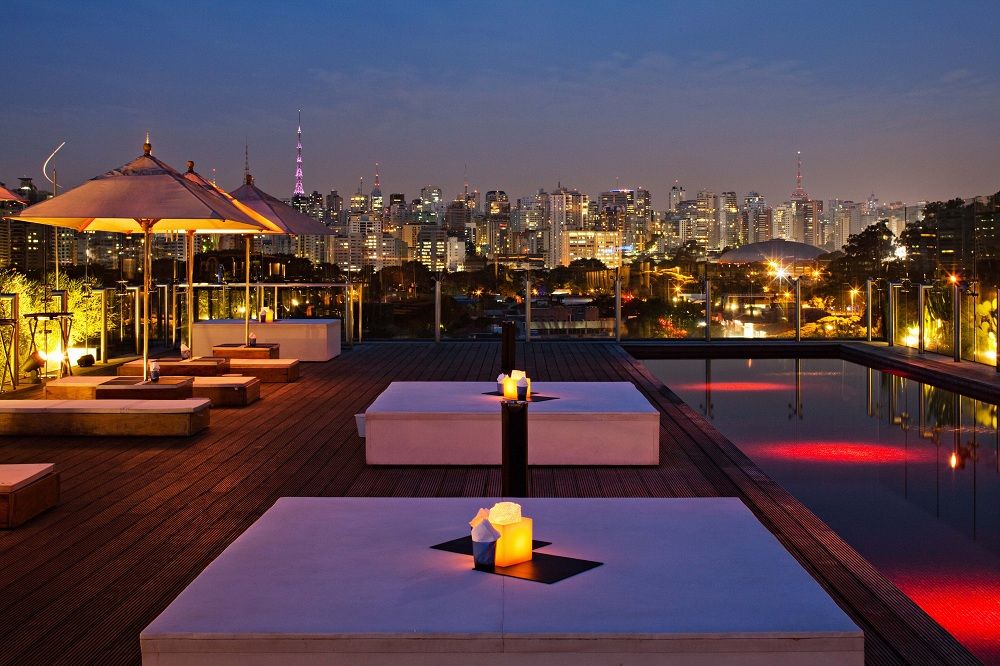 Radiating a Hollywood vibe from every corner, the Skye Bar perched on the eighth floor of the architecturally distinctive and luxurious Unique Hotel is perfect for those to wish to combine their wine and dine with a stunning visual extravaganza. Designed in the shape of an enormous boat, this lounge stands as an emblem of Brazil’s adventurous architecture. A frequently visited den of the nipped and waxed glam LA crowd, the Skye lounge boasts of a crimson hued pool with an underwater sound system. It also delights guests with a panoramic view of the Ibirapuera Park and the São Paulo skyline comprising of Paulista Avenue´s skyscrapers. The open-air pool is reserved for hotel guests during daytime but is open for the general public at night. Even the private elevator which rides up to the bar brings along a posh feel as it opens to a gleaming cream corridor. Head Chef Emmanuel Bassoleil serves up delicious and innovative dishes along with the most famous Brazilian cocktail caipirinha and wasabi martinis. 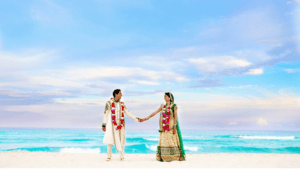 Previous post Famous and the Most Stunning Wedding Destinations for 2021 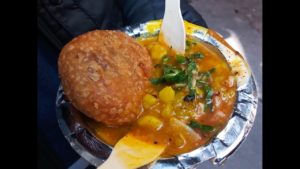 Have A 10/10 Lunch Date With These Pretty Restaurants And Cafes Around You!

Top Cafes in Delhi that You must at least Visit Once